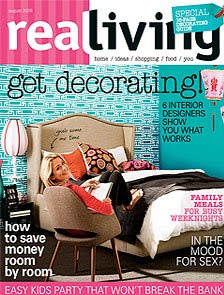 I'm quite excited about this issue of Real Living - because it's the first one I haven't had anything to do with as I was on maternity leave when they started it. It's so nice to read the mag as a reader and not an employee. Although the poor office probably hates me for it cause last time I was on maternity leave I actually sent them a way-to-long synopsis of what I thought about it - loves, hates, things I would have done/wouldn't have done/should have done (they were used to my annoying changes as deputy ed!). I'll try not to this time! So I can't really tell you what's in it except the one feature I actually know a little about - the kids party! Only because I was at the shoot - Zak was a party guest. My mother-in-law reminded me of this when she called me excitedly yesterday after receiving her subscriber copy (remember, they get them early - an incentive to sign up for a subscription!). I also made the cut, much to my horror. I was told it was kids only, so didn't exactly make an effort. In fact, I was so late leaving for the shoot, I don't think I washed my face, let alone put make-up on or dressed appropriately. A quick thanks to our lovely retoucher, Bi, who magically made my bra strap disappear!

Other than the kids party, there is a great house feature - of Emma Cassi - which we had to shoot after seeing it around the web. I love, love her bedhead. Make sure you check out the issue and of course, feel free to tell me your loves and hates (I'll pass on to the team!).

Have a great weekend
Bx

Oooh how exciting! I'm not a subscriber though so I'll have to pesker my newsagent man.

its a great issue...i got mine last week and Im still reading it in fine detail! nice to see a pic of you featured too!!