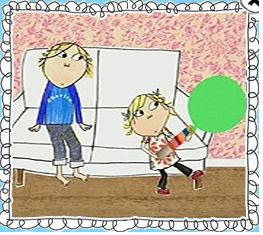 Is it just me? Or is this somehow inspiring to you too?

Is it weird to be inspired by a children's book? Cause I totally am. I was just about to turn off the TV after Playschool the other day (that Zak was watching, not me. Well not just me), but then these little characters with adorable British accents popped onto the screen and I had to see what it was. Turns out it's my new favourite TV show: Charlie and Lola. They're hilarious and cute and I actually made Zak watch it before I got him dressed cause I was a little bit enthralled. It's like Bridget Jones for kids. But while he liked the actual show and characters, I was more interested in the very cool sets. Which is quite bizarre because the show is illustrated (aside from a few paper and fabric swatches incorporated very mixed-media-like). For some reason, the child-like drawings of funky white furniture against colourful, printed backdrops really appeals. And while I'm not exactly going to redecorate with cardboard furniture to get the look myself, I do have some new ideas for the kids' playroom when it's time to decorate. And I actually think parts of this "look" could look quite cool in the right home.

I guess I'm not the only one: Domino once featured the house of one of its contributors, Rita Konig, and I remember the funky cardboard fireplace she had in her living room that her mother had commissioned by a set designer. 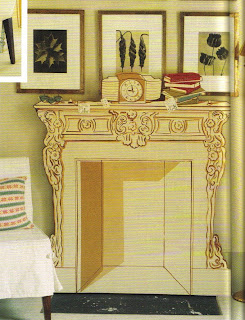 I also found on The Peak of Chic's blog (while looking for said fireplace!) the cover of this book, below, that features a faux mirror, table legs, lamp shade and possibly wall mouldings. In fact, they did such a good job, it's hard to tell what's real and what's fake! 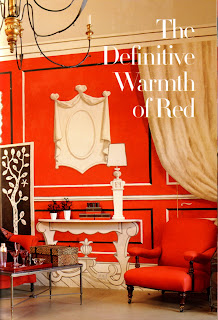 What's real, what's not? Pic from The Peak of Chic

And Jen from Made By Girl posted some pics of a house the other day that features a similar vibe: bold white animated wall sconces on a bold wallpapered wall. 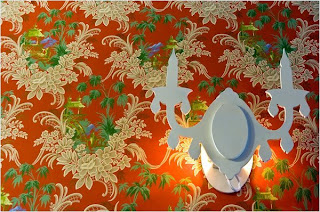 Wall sconces in Pamela Bell's home. Pic courtesy of Made By Girl

I think this look would be perfect for store windows and fittings, kids rooms and for a humourous talking point in a living room. And if you're no good at painting or can't find the right piece, there will be a wall decal to help you out! Like this chandelier from Luka or hall stand from Lola et moi. To really give the decal a bit of punch, stick disguised scones on the wall with real candles and hooks for real coats. Cute? Or naff? 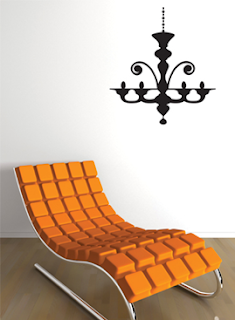 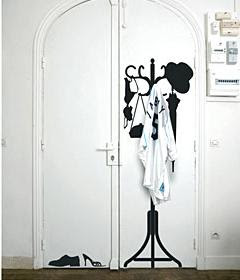 On the subject of Charlie and Lola, you must, must check out their fab website and that of their creator, Lauren Child. I'm 31 years old and was colouring in, playing the games and watching the clips. But it's also a brilliant site for the kids old enough to navigate a computer (so, what, 2 these days?!). The books are also being sold at Kmart. I've started the collection for Zak - he thinks it's about Layla, not Lola! Ha!
Posted by belinda graham at 21:26

it's all adorable! I'll have to check out Charlie and Lola too - just the right ages for my girls (and me too!)

im a fan and i dont have kids :P

have you seen charlie and lola's room? So cute!

Oh I love Charlie and Lola, it's such a sweet show, I wish I had a sister like Lola LOL!
Nicky
(www.snobnicky.wordpress.com)

Oh I love Charlie and Lola, it's such a sweet show, I wish I had a sister like Lola LOL!
Nicky
(www.snobnicky.wordpress.com)

I am so with you.. I adore Charlie and Lola for more than one reason but one of the biggees is the illustration and design... Lauren Child is brilliant!

The playroom is where a child’s imagination grows. And the Child Desks where it prospers. Well, I believe in having utility-based Kids Playroom Furniture at home.