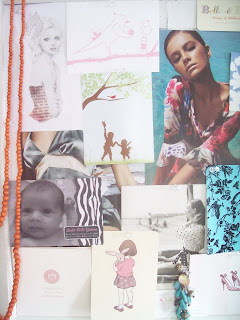 Moodboard close-up. See Layla's birth announcement? You can read about it here

I'm am still alive and well and not buried under a pile of nappies (although, it certainly feels like it sometimes), just been busy! Soo, due to the little bit of craziness that is being home alone with two babies during the day, I'm going to alternate posting days between the two blogs as much as I can - so one day here, one day at mini meez. Hopefully this will work better than nothing on either for days on end!
Anyway... I've posted my office before, but I just had a tidy up the other day and prettified it a little so thought I'd share again. I originally used my pinboard for useful things (like bills and lotto tickets and stamps etc), but I've gone the every-other-office route and just stuck up pretty cards and things cause it's sooo much nicer to look at. And adds a little colour to the place! Now the real challenge is keeping it this tidy. Rather easy while I'm on maternity leave, but once I go back to work I'll probably forget what colour the desk is! 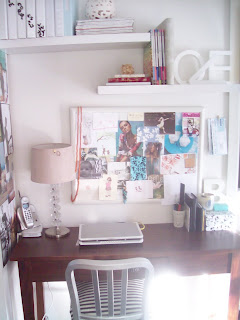 Clean, tidy and colourful. It's a nice place to work. And much lighter in photographs than in real life!

I culled my magazine collection as best I could recently. But not before going through every single one and ripping out pretty pics. Most of them are in a box, but I went through and chose some faves, especially if they featured some hit of turquoise - my favourite colour. I find it so fresh and pretty and it's the one shot of colour you'll find in my mostly brown home! 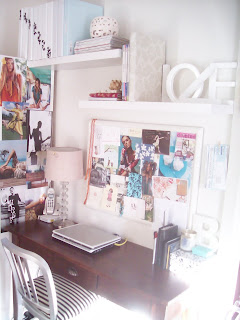 The side of the cupboard is now a feature rather than blending in.
Apologies for weirdness of photographs - am not sure what's going on with my camera! Have to ask Dad (cause way too complicated to figure out myself!)
xx
Posted by belinda graham at 21:36

what a lovely desk area- mine is a large table covered in everything surrounded by hundred of shelves so full its impossible they could ever look smart and I also have baskets all along the corridor and on top of a beam across the corridor- I really need a clear out! Good luck with your little ones!

What a gorgeous desk area. Bet you find oodles of inspiration from your memo board.

Love it! Did I inspire you? :P

i really LOVE the chair in your office and the L-O-V-E letters !!

Hahah I have a very similar tea light holder as you (on your top shelf) that I got from Dusk. Mine came with a lid but my partner broke it... is yours s'posed to have a lid too?!

thanks all! kate, it did have a lid but Zak broke it while enthusiastically trying to put it back in place after picking it up to have a look inside! It was a pressie from my brother-in-law so could be from same place - they have one up here!